The Auckland Festival of Photography 2015 features the 5th Annual Commission. Each year, an Auckland-based photographer is commissioned to create a new body of work for exhibition during the Festival. The commission provides an opportunity to support and promote an Auckland photographer as well as create a cultural and artistic asset for present and future Auckland audiences to enjoy. This year’s commissioned artist is PJ Paterson.

PJ Paterson’s work concentrates on the politics of progress and his love/hate relationships as a consumer and a commentator on consumption. He is interested in the beauty created by the juxtaposition of the detritus of capitalism in pristine landscapes. Using digital techniques to stitch multiple photographs together, Paterson forms an imaginary scene which is more an exaggeration of reality than a complete fabrication - a fiction that suggests a larger, prescient truth.

Born in Manchester, UK in 1974 Paterson emigrated with his family in 1976 to Auckland, NZ where he lives and works today.

As part of the 5th year milestone celebration, the Creative New Zealand International Asia Co-commissioning Fund is supporting the 2015 Annual Commission. The new P J Paterson work will also be shown in China at the Pingyao International Photography Festival in September 2015. 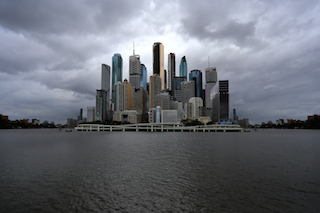 The Island by PJ Paterson