Dina Goldstein is a Canadian photographer working with large-scale tableau, exploring elements of the human condition, through the lens of Pop Surrealism. Dina’s career began as a photojournalist and editorial and photographer. She describes her early work as photoanthropology, where she documented and exhibited portraits of Palestinians, Gamblers, Teenagers, Weightlifters, Wrestlers and various other subcultures. Dina was inspired by personal events when she created the highly conceptual ‘Fallen Princesses’ series 2007-2009. The series questions the “happily ever after” motif created by Disney and Western society. The project was a huge online success and continuously goes viral. She continued with a tradition of fine detailed productions with her second major body of work ‘In the Dollhouse’, 2012, a 10 part sequential narrative that takes place within a very pink adult sized Dollhouse belonging to Barbie and Ken.  Dina has won numerous awards such as the Arte Laguna Grand Prize, which invited her to attend a residency in India.

Dina’s ‘Gods Of Suburbia’ 2014, is a most complex photographic initiative. The work is a visual analysis of religious faith within the context of the modern forces of technology, science and secularism.  Dina just released Modern Girl, inspired by Chinese advertising posters of the 1930’s, Modern Girl examines identity, gender roles, diasporic cultures, and consumerism. She was awarded the Prix Virginia in 2014, an International Prize for Women, and invited to Paris where an exhibit was mounted. Dina continues to create new work and exhibits with public galleries, museums and commercial galleries internationally.

This is Dina Goldstein’s third large-scale project 2014. The work is a visual analysis of religious faith within the context of the modern forces of technology, science and secularism. The series plays with narrative and religious iconography in order to communicate how organized belief has become twisted within a global framework driven by consumerism and greed.  The project challenges the viewer — religious or secular — to embark on a journey of self-reflection as they contemplate the relevance of dogma in modernity.


Who doesn’t wish they could be Satan, just for a day, operating without the prick of a conscience?

My modern Mephistopheles is a tow-truck driver, winching up the car of a grandmother who pleads with him but her dismay amuses him.

This photograph is a critique of how draconian the rules of society can be. Satan has the authority to tow grandmother’s car away, but is it the right thing to do? As a society, we devise laws that are meant to make society a just place for all—but we fail so often. 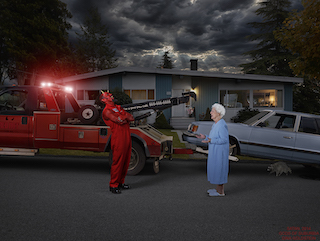