Control - Beckon Us From Home

On a Thursday afternoon, six teenage boys gathered in an abandoned warehouse in the town of Diveevo, Russia. Their instructor began to divide the boys into teams, and immediately the drills began. The group, called “The Survivalists,” meets weekly to practice tactical skills and defense strategies. Artyom, an older teenager of the group, was helping another student, Daniel, eleven-years old, to hide and prepare for a surprise attack with his plastic weapon in the corner room of the warehouse. Their instructor calmly tells me that their group is not looking for war, but they are preparing young patriots to be ready for the future.

Over 200,000 youth in Russia are currently enrolled in patriotic clubs, with 10,000 in Moscow alone. Each club functions independently with their own structures and philosophies. In 2015, a proposed program from the Russian government entitled the “Patriotic Education of Russian Citizens in 2016- 2020” called for an eight percent increase in patriotic youth within the next ten years, and a ten percent increase in new recruits for the Russian armed forces.

Sarah Blesener is a documentary photographer based in New York City. Born in Minneapolis, Minnesota, she studied Linguistics and Youth. 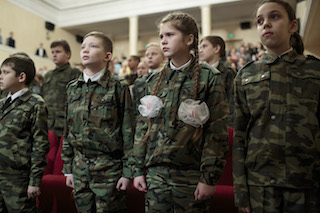