Shahidul Alam, is director of Chobi Mela, Dhaka, Bangladesh and a photographer, writer, curator and activist. Alam originally obtained a PhD in chemistry at London University before switching to photography. Returning to his hometown Dhaka in 1984, he documented the democratic struggle to remove General Ershad. A former president of the Bangladesh Photographic Society, Alam set up the award winning Drik agency, Bangladesh Photographic Institute, Chobi Mela festival, Majority World agency and Pathshala, the South Asian Media Institute, considered one of the finest schools of photography in the world.

He is a featured artist in the Venice Biennale in May 2017. A speaker at Harvard, Stanford, UCLA, Oxford and Cambridge universities, museums in all continents, as well as TEDx, POPTech and National Geographic, Alam has been a jury member in prestigious international contests, including World Press Photo, which he chaired and Prix Pictet, chaired by Kofi Anan. Honorary Fellow of the Royal Photographic Society, Alam is a visiting professor of Sunderland University in UK and advisory board member of National Geographic Society and Eugene Smith Fund. 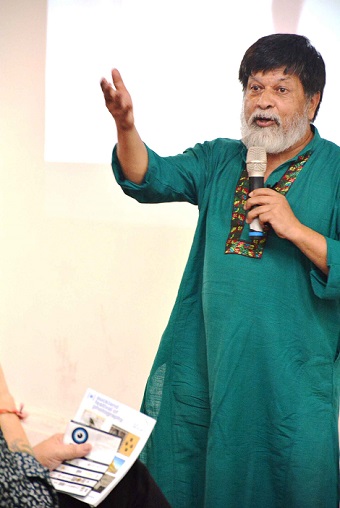